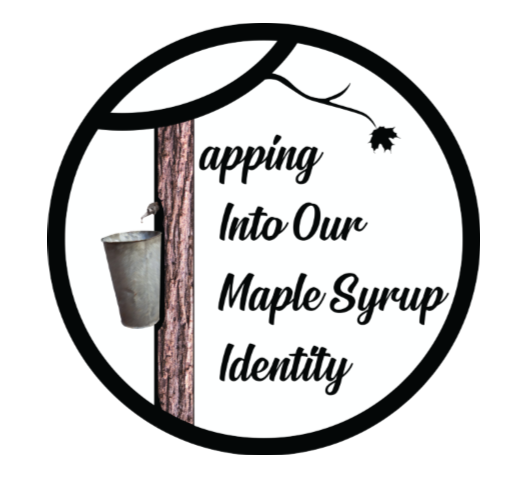 Whether folks were not sure how to identify a sugar maple tree or have been tapping trees for years, this was an opportunity to pick up some new tips on producing maple syrup!

The Beginner Maple Syrup Conference was a joint program of University of Wisconsin-Madison Division of Extension and Michigan State University Extension funded in part with a grant from the USDA Acer Access and Development Program. 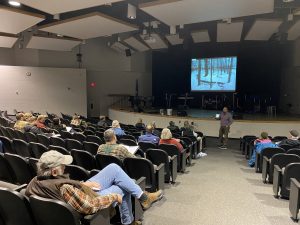 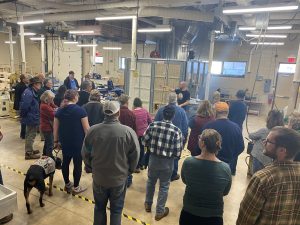 Roger Peterson of the Hurley K-12 School showed the latest expansion of the Northwoods Manufacturing facility and explained how he’ll be making syrup with students Spring 2020.

My name is Theresa Baroun. I graduated from UW-Green Bay with a Bachelor’s Degree in Human Development and Psychology. I have been making maple syrup since I was a child at my family’s business, Maple Sweet Dairy in De Pere. My husband, Jon and I along with our 2 children, Justin, Alicia, and my large family tap1100 taps on tubing and buckets. We cook on a wood fired evaporator and finish on a propane finish pan. Besides making maple syrup, we make many different value-added products including maple cream, maple candy, cinnamon maple syrup, bourbon maple syrup, honey maple syrup, maple cotton candy. In 2018, my highschooI friend and I joined forces with our honey and maple syrup to create our new added adventure, Maple Buzz. I was hired in December 2015 as Executive Director of the WMSPA. In my position at Executive Director. I take care of planning WMSPA Association events, membership, working with the state on maple issues, going around the state presenting educational seminars, working at the WI State Fair, editing the WI Maple News, and attending many maple events throughout the year. A big accomplish this year was along with Christine and Alison Anderson, we recently designed an updated teacher’s packet, power point and hands on kit to teach students throughout WI about the Wisconsin Maple Industry. I have showcased our Teacher’s Packet at various Teacher’s Conference throughout WI. I enjoy working with WMSPA members, teaching individuals about the maple industry and promoting the use of Wisconsin Maple Syrup.

Jerry Jondreau is a member of the Keweenaw Bay Indian Community (KBIC) and lives on the reservation with his family and 6 children. Jerry graduated from Michigan Technological University in 2012 with a Bachelor’s degree in Forestry. Upon graduating, Jerry established and directed the first Tribal Forestry Department on the KBIC reservation which continues to take care of the forests on the reservation to this day. After leaving the KBIC Forestry Department, Jerry began working at Michigan Tech as the Director of Recruitment for the School of Forest Resources and Environmental Science. This fall, Jerry and his family established Dynamite Hill Farms and will be working full-time producing ziinzibakwad (maple sugar) in the spring and harvesting manoomin (wild rice) in the fall.  The Jondreau family continues to advocate and educate Tribal members and non-Tribal members about the forest, Treaty Rights, and our responsibilities to the land.

Darrin Kimbler is the University of Wisconsin-Madison Division of Extension Agriculture Educator for Iron County. Darrin comes to Iron County from Kentucky by way of the US Army and UW-Madison, where he majored in Botany and Forest Ecology.  He did his graduate work in Forest Physiology and has done research in different ecosystems from southern Appalachia to northern Manitoba.  He is an avid canoeist and a general outdoor enthusiast. He and his wife Eve own Taiga Farm and Vineyards in Ironwood Township. They raise Icelandic sheep, pastured pigs, produce and wine grapes using evidence based husbandry and growing methods.

Joe Polak was born in 1952 into a northern Wisconsin family that has always been very involved in outdoor activities. He has made maple syrup his entire life and operates Maple Hollow, a maple syrup and equipment sales business with his wife Barbara. His father, John, was a farmer and logger. His mother, Lena, was a cook in a logging camp and helped on the farm. Joe is the youngest of four children.  His two older brothers both have maple operations of their own and his sister owns and operates a gift shop in southern Wisconsin which sells Maple Hollow products. He graduated from the University of Wisconsin – Madison in 1975 with a Bachelors of Science degree in Elementary Education and taught for 1 year before his father’s illness brought him home to help with the maple syrup business.

He is a member of the Wisconsin Maple Syrup Producers Association and has been President, Vice President, Director and Editor of the newsletter, the Wisconsin Maple News. He currently is a member of the Marketing Committee. He has held the position of Secretary-Treasurer of the North American Maple Syrup Council since 2003. His educational background has been a great help promoting Pure Maple Syrup and giving the many educational seminars and classes on making maple syrup at county and state association meetings.

Jesse is the director of MSU’s AgBio Forestry Innovation Research Center located in the Upper Peninsula of Michigan just outside of Escanaba. His research focuses on silvicultural treatments in hardwoods and lowland conifers to regenerate desired forest stand compositions, sugar maple and Christmas tree improvement, and deer / forest interactions. Randall’s Extension program focuses on maple syrup production, sugarbush management, and forest management for wildlife.  Prior to MSU, Jesse was an Associate Professor and Extension Forester at Iowa State University.

Jeremy and his wife, Abi, co-own Tapped Maple Syrup, which produces craft infused, barrel-aged, and pure maple from sustainably managed lands near Antigo, WI. He grew up making maple syrup with his dad and uncle. In addition to being an entrepreneur, Jeremy works for University of Wisconsin-Extension in the areas of natural resources education and program planning. He and Abi live in Stevens Point with their 3 children who all get to haul sap in the spring.

If you need an accommodation for a disability to fully participate in a program/event, please contact Rebecca Holm at (715) 561-2695 (voice) (711 for Wisconsin Relay). Please allow sufficient time to arrange the accommodation.
University of Wisconsin-Madison      |        Explore Extension: Agriculture Community Development Families & Finances Health Natural Resources Youth
Connect With Us
Home

We teach, learn, lead and serve, connecting people with the University of Wisconsin, and engaging with them in transforming lives and communities.

Connect with your County Extension Office »

Find an Extension employee in our staff directory »

An EEO/AA employer, University of Wisconsin-Madison Division of Extension provides equal opportunities in employment and programming, including Title VI, Title IX, the Americans with Disabilities Act (ADA) and Section 504 of the Rehabilitation Act requirements.